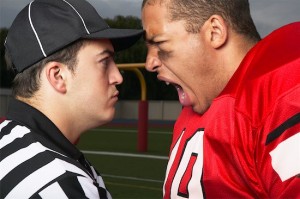 Have you ever wondered how professional referees are trained?  What kind of training do they go through that teaches them to remain calm, collected and expressionless, even when they have 300-lb steroid cases snarling and spitting in their faces? (No offense to 300-lb steroid cases—I understand that you’re just doing your job).

How do refs stand there without flinching or trembling in fear? How do they remain so impassive and seemingly unaffected by the intense emotions, anger and verbal insults that are often hurled at them when they have to make fair, but disappointing calls?

One of my clients shared the following Budweiser video advertisement with me that answers the above questions and thought I’d share it here at Shrink4Men for a little end of the week gallows humor:


It appears that an abusive, high-conflict wife is the perfect home-training kit for having belligerent coaches, linebackers, defensive tackles and team owners screaming in your face on the field. Who knew? Can’t wait to see the Super Bowl adverts this year. Many of the 2010 Super Bowl commercials chastised men for voluntarily becoming obedient lapdogs to abusive, materialistic, pathologically critical women. I wonder if the 2011 Super Bowl ads will do the same?