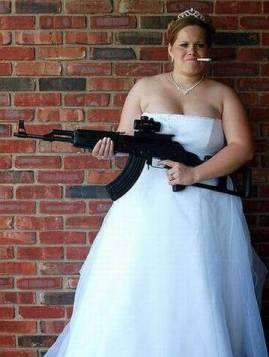 Remember back in the 1980s when sitcom character, Diane (Shelley Long), had Sam (Ted Danson) arrested on Cheers to try to force him to propose to her a second time after she turned him down the first time? Well, in an instance of life imitating art, a 40-year old Chicago woman recently tried to have her boyfriend arrested in order to coerce him into marrying her.

Being 40 and unmarried isn’t enough of an emergency to warrant a 911 call, a lesson one Chicago woman may have learned the hard way.

“Officers learned she was lying,” said officer Mike Sullivan. “She called 911 to force her boyfriend to ask her to marry him.”

But rather than a diamond ring, police say Perez got a misdemeanour charge of disorderly conduct.

Sullivan said phony 911 calls get in the way of real police work.

“For all the severe calls we get, to get something like this is not good.”

Call me not crazy, but if you have to threaten your boyfriend with jail in order to get him to marry you, he’s probably not the right guy for you. What is it with women who view 911 and law enforcement as their go-to option when they’re angry, disappointed or can’t get their way? They’re like 3-year olds who run to a parent or teacher because, “Billy won’t play with me! Wahhhhhhhhhhhh! Make him play with me!!!!!”

Guess what ladies, if you’re boyfriend doesn’t want to marry you, it’s not a criminal offense. Furthermore, maybe one of the reasons he doesn’t want to marry you is because, oh, I don’t know, you think it’s acceptable to call 911 on him because you’re not getting your way or he disagrees with you about something or doesn’t jump when you bark commands at him. When women make bogus 911 calls for these reasons, I think police should do what parents of petulant, out-of-control toddlers do: Put the offending woman in timeout, i.e., a jail cell cot, and then make her prove she understands what constitutes a legitimate 911 call before she’s released.

When I was a child, I learned that 911 is for emergency/criminal/life threatening situations and that you can get into trouble for calling 911 for non-emergency situations. Ask any 5-year old. I’d wager that most of them understand when and why you call 911. At least Ms Perez is facing some legal consequences. And, if her boyfriend has any sense, he’ll not only not marry her, but end the relationship altogether and get a restraining order. Definitely an, “I don’t!”