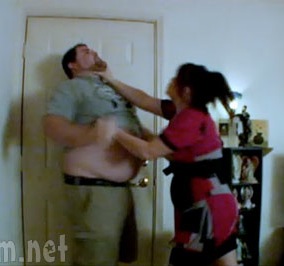 MTV’s Teen Mom Amber Portwood is under investigation for committing domestic violence against her on-again-off-again fiance, Gary Shirley. When confronted by Dr Drew Pinsky on the Teen Mom reunion episode, the reality show faux-lebrity broke down in tears and claims she only remembers hitting her fiance one time. If she’s truly can’t remember her actions, perhaps she should also undergo a psychiatric examination for dissociation. A mother who actively dissociates should probably not be left alone with a child without supervision.

Portwood is being investigated by the Anderson, Indiana Police Department for domestic violence and the Indiana Department of Child Services for punching, slapping and choking Gary repeatedly in front of their daughter, Leah. Exposing a minor to domestic violence is child abuse and a felony charge in several states.

In Indiana and other states, domestic violence in front of a child under the age of 14 can result in felony charges, Caryn Burton, training director at the Coalition Against Domestic Violence, told HollywoodLife.com. There has also been some talk about whether the MTV camera crew’s decision to not intervene in the attacks could merit misdemeanor charges, as it is similarly against Indiana state law to not report witnessed domestic or child abuse.

In an editorial entitled “Reality TV Giving Wrong Impression of Anderson” in a local newspaper, The Herald Bulletin, an Anderson-based reporter had a lot to say about Amber’s behavior. “She kicked and punched him seven times before kicking him in the back as he walked down a flight of stairs … Reality shows prey on featuring people who appear to be undereducated, narcissistic and full of anger,” the piece reads. “‘Teen Mom’ is not the national image Anderson wants. We don’t push our loved ones down stairs. We don’t take pride that our teenage girls are 16 and pregnant. We don’t all drop out of high school.”

Prediction: Amber will get a slap on the wrist and be required to attend anger management training and parenting courses. If it had been Gary punching, choking and slapping Amber on film in front of a minor, wouldn’t he have already been arrested and have restraining orders against him by now? Cue Whitney Houston’s rendition of I Believe the Children Are the Future. Here’s the clip from NBC’s Today Show: