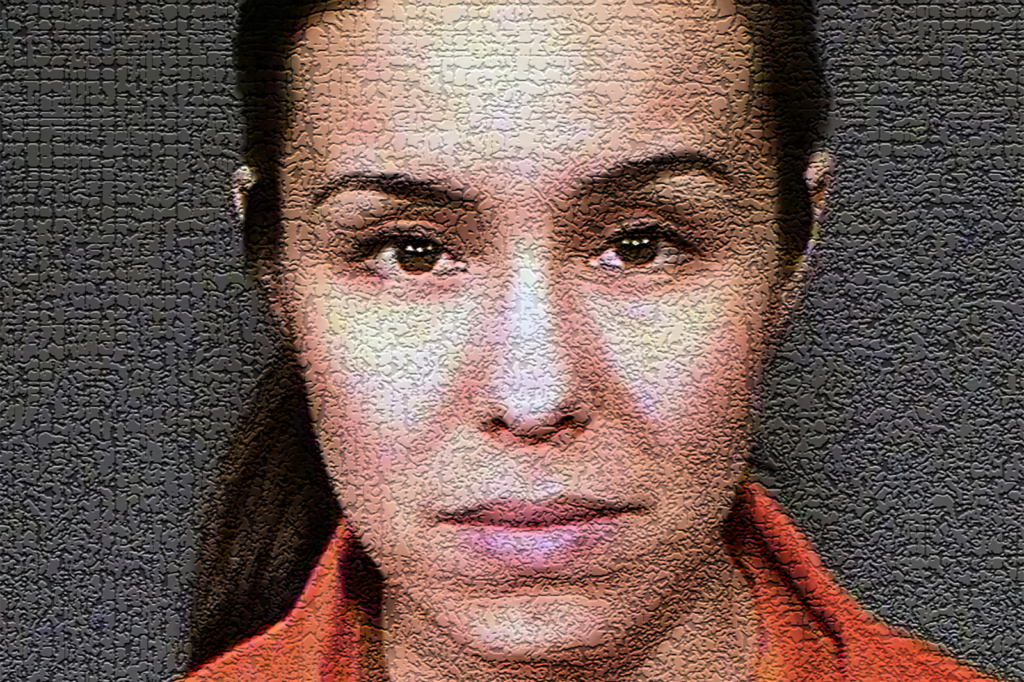 Jodi Arias murdered  her ex-boyfriend, Travis Alexander in May 2008. I’m re-examining Jodi Arias in the ongoing wake of the three ring shitshow circus that is and was the Amber Heard vs. Johnny Depp defamation trial. The similarities between Jodi Arias and Amber Heard are uncanny.

For example, they’re both diagnosed with borderline personality disorder. They’re both violent pathological liars. And, despite overwhelming evidence of their violence and guilt, they both claim to be innocent domestic violence survivors. Albeit, Amber wasn’t able to finish Johnny off like Jodi did to Travis.

After Jodi made her junior high school arguments about all the good things she “pledged” to do in prison, Arias presented a slideshow for the jury. Complete with baby photos, as if her murder trial is some kind of kindergarten class show-and-tell – “What I did on my summer vacation” oral report. She included:

Her argument seemed to be, Please don’t put me to death for my crimes because I was a cute baby. Guess what, Ted Bundy was every bit as cute as Jodi as a tyke.

WTF #14: But seriously, she really does have friends. You can believe her.

Arias then claimed her best friend from high school wanted to be at court to testify to her good character. Except that the women was being harassed and receiving death threats, which is why Arias had no one their on her behalf. Lest we forget who the real victim in all this is.

Next, Arias made some vague references about her relationship with her father improving after she moved out. She then pivoted to not having enough money to pay for heat in the first apartment she shared with her first boyfriend.

Randomly adding that it got so cold they could see their breath. (“ . . . And then my dog stepped on a bee . . . ” Amber Heard, 2022). Arias quoted Charles Dickens, said her first (still alive) boyfriend would always be “special to her.” Next up, she showed more projector slides of other ex-boyfriends.

Arias talked about the many different hairstyles she’s sported over the years. All with corresponding photos. Proving there’s always time for selfies, even when you’re pleading with the court to spare your life.

Here I am in my redhead stage. Then in  blond stage. Here I am skiing. Now I’m in Palm Springs. Here I am on a terrace — it’s on the ocean, but you can’t see it very well on this screen. Look at me, look at me! Look at meeeeeeeeeeeee! The previous sentences aren’t direct quotes. I’m paraphrasing.

WTF #17: But she was popular with the fellas!

Arias showed even more ex-boyfriend pictures. She talked about going on dates to live reggae and blues performances in Monterey. And how the band dedicated songs to her and her then boyfriend (another one who’s still breathing).

She and her myriad exes went on summer camping trips (photos). They hung out with their colleagues after work (more photos). Jodi and another ex rode the aerial tram in Palm Springs (another photo). And, last but not least, Arias and an ex went to Chuck E. Cheese. Again, WTF?!?!

Arias sniffled and seemed to choke up (no actual tears) about how she wouldn’t be able to take new photos at her sister’s wedding in 2014. Nor would she be able to hold her nieces and nephews. So unfair.

Every now and again, Jodi threw in a cursory reference that Travis wouldn’t be able to do these things with his family either. She then quickly resumed talking about herself.

At this point, I wondered if one of her attorneys had her edit in the Travis mentions after reading Jodi’s first draft. If only to create the illusion of feigning some semblance of empathy.

Jodi had a pity party about how she’d never be a mother. Unless, of course, some freak out there would be willing to marry her, have conjugal visits and knocks her up. You know there’s more than one freak out there that would marry and have kids with this psycho. To date, however, I don’t think this has happened.

Arias seemed to want the jury to sympathize with just how adversely murdering Travis caused her to suffer. From start to finish, Jodi made it all about her.

WTF #20: As some of you may know, Jodi is an Artist. Not to be confused with Sommelier Jedi level like Amber Heard.

She went on to bemoan the fact that she won’t be able to do oil paintings in prison. Among her oeuvre were portraits of Frank Sinatra, Elizabeth Taylor and Elvis. Sweet Baby Jesus, WTF.

Then Arias sniffled about how she’ll no longer be in family Christmas portraits. Portraits. Narcissistic much? Heaven forbid she miss a photo-op.

WTF #22: “I was hoping to avoid trial, not the outcome and go quietly into the night.”

Go quietly into the night? Avoid exposure? As the trial occurred, she was on every news channel, YouTube and all over print media. If there was a camera and a mic, Jodi was there. At one point, she was running her Twitter account from jail.

The defense’s fatal mistake was putting her on the stand and in front of media cameras. Had she kept her mouth shut, looked pitiful and, most importantly, mute from the defense table, her cockamamie defense might’ve worked.

WTF #23: “It was never my goal to malign Travis’ character. It was my goal to preserve his reputation.”

Bullshit and WTF, WTF, WTF, WTF. She recounted their sexual relationship in graphic detail and in unadulterated predatory braggadocio. She tried to put him on trial for liking what some people consider kinky sex. Just like Amber Heard did regarding Depp’s drug and alcohol issues.

Yes, Jodi Arias really said this at the end of her pleading. In case you don’t know, it’s one of the last lines from Alfred Hitchcock’s thriller, Psycho.

In many ways, my family has suffered a loss, too . . . their hopes of welcoming me home someday were forever dashed [when I was convicted].

Again, this was all about Arias and her suffering with cursory mentions of the Alexanders’ suffering. Steven Alexander wrote in his victim impact statement that he didn’t want to see Arias anymore. I felt the same way about Arias then. And it’s the same way I feel about Amber Heard today.

Here’s a synopsis of the “mitigating factors” to not give Arias the death penalty: 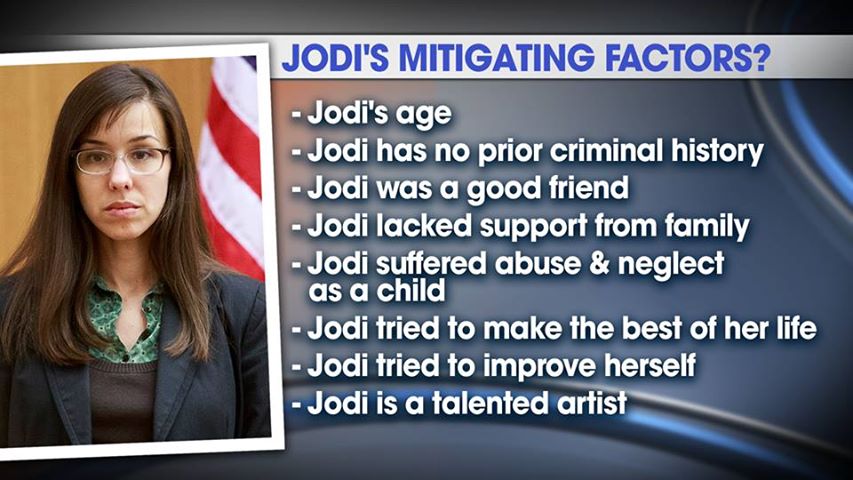 None of this was relevant.

If Arias had any self-awareness, remorse and, most importantly, a conscience, she would’ve said something like:

“I am both deeply ashamed and sorry for what I have done. Even saying this, I know there is nothing I can do to make amends for the pain and harm I have caused Travis, his family and my family. Even though I don’t deserve it, I beg this court for mercy. If you give me life instead of death, I promise I will be a model prisoner, stay out of the public eye and do nothing to cause Travis’ loved ones further pain. I am profoundly sorry and will regret what I have done until the day I die.”

Jodi Arias wasn’t and isn’t sorry for killing Travis Alexander. Like many narcissistic and borderline predators, she’s sorry she got caught and is now suffering consequences for it.

She believed she was justified in murdering him, and that he deserved it. I suspect she still does. If she were truly sorry for murdering him and for the pain she has caused his family, she would never have tried to justify her actions nor pretended to be Travis’ victim.

She wouldn’t have dragged his name through the mud, nor put his sexual proclivities on trial. She’s not sorry for committing murder. She was pissed off she didn’t get away with it. All the while trying to fashion herself as some kind of feminist folk hero. Fuck her.

In the next installment, I’ll provide a comparison to the psychological similarities Amber Heard shares with Jodi Arias.