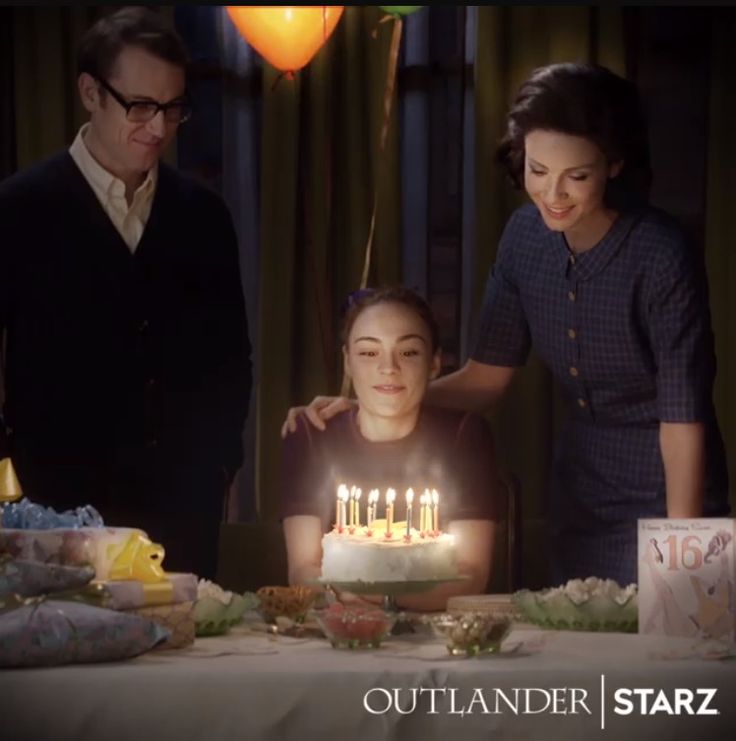 Hate to admit it, but I really enjoy it. It’s implausible, romance novel time travel schlock, but great escapist eye candy. Okay, I read all 9 books and most of the novellas in the series, too. It’s really no worse than movies with lots of car chases and building explosions.

Wait a minute. Why am I defending myself to you guys?! [Insert winking smile emoji.]

To catch up with the series, I read a recap on Vulture by Nicole Cliffe, Debts All Paid. The article zipped along until a groan and eye roll inducing passage pertaining to the spiraling marital breakdown between Claire Beauchamp Randall Fraser Randall Fraser Gray Fraser and Frank Randall:

Back in Boston, even more time has passed (we can tell because Frank is wearing glasses now) and Claire is celebrating her graduation from Harvard Med. The party looks like a lot of fun, until a knock on the door reveals that Frank’s latest squeeze has shown up at a HIGHLY inopportune time, which results in Claire thoroughly bitching out her inebriated husband at the end of the night. This is not “being discreet,” Frank! Claire suggests they consider divorce, but Frank, who has been reading way too many men’s rights subreddits, says he can’t reconcile himself to losing custody of Brianna so they’ll just have to continue muddling along and making each other miserable.”

Look, I enjoy sarcastic commentary as much as anyone. In fact, it’s kind of my thing. This isn’t about language policing. It just isn’t funny. The pain and fear felt by Frank Randall and countless real life men and fathers isn’t pain and fear born out of disordered thinking, emotional dysregulation or men’s rights subreddits. This really happens.

A good number of men stay in bad marriages until the children are adults because they fear losing their children. Women in bad marriages also fear this, but most women, whether we’re willing to admit it out loud or not, know we start off with a pretty big advantage in family court. It’s isn’t fair to fathers or children. For several reasons, it’s also damaging to women, but that’s a separate topic.

High-conflict, narcissistic and borderline men engage in parental alienation and use kids as weapons, too. High functioning personality disordered men are also good at gaming systems. But can we just admit that, by and large, women usually don’t have a difficult time getting primary custody if they want it, even when the dad is just as good a parent (or better) and has been equally involved? Actually, it doesn’t matter if some of you reading this don’t want to admit it. The data supports it.

Even if the dad wasn’t equally involved during the marriage (e.g., mom quit her job so dad had to work full-time and missed out on equal parenting opportunities) doesn’t mean it needs to continue after the divorce. In fact, many of the men I work with finally get to be the parent they want to be after divorce (without a narcissistic or borderline wife undermining their efforts to parent). There are many non-disordered women who believe fathers just aren’t necessary, which is wrong.

If a man is married to an abuser, his fears of losing his kids are especially legitimate. Abusive partners routinely tell their spouse they won’t see the kids again should they divorce. Female abusers get away with this far more easily than their male counterparts because of the inherent cultural and Family Court biases that favor women and mothers. I’m not gender war flame fanning. This is just reality.

It’s hard for any loving parent, mothers and fathers, to voluntarily give up time with their children. It’s easy to understand why some women take advantage of the unfair advantage in Family Court. Just because we can do something, doesn’t mean that we should. Especially if it isn’t in the best interests of the children.

I’ve worked with a number of men who live in family court districts where dads are lucky if they get every other weekend and Wednesday nights with the kids. For the men who have high-conflict personality disordered exes, they’re doubly luck if they follow the court orders instead of playing keep away with the children. Many of these men have to go back to court time and again to petition the judges to uphold the judges’ own orders just to have the crappy every other weekend custody schedule, which is really the bare minimum.

Ladies, if the shoe was on the other foot, that’s your foot, you’d have the same fears and divorce would be just as unpalatable of an option for you, too. Not something to ridicule.

Frank suggests they consider divorce, but Claire, who has been reading way too many CafeMom bio mom forums, says she can’t reconcile herself to losing custody of Brianna so they’ll just have to continue muddling along and making each other miserable.”

Some states, like Arizona, have made 50/50 shared custody the default now. My AZ clients have a lot less dread than the dads who live in in other less enlightened jurisdictions. That’s not to say Arizona’s Family Court system is perfect. Far from it, but at least there’s a level playing field to start.

It’s very easy to make this about men vs. women, mothers vs. fathers. It generates a lot of activity on websites by throwing red meat in both directions. This approach hasn’t fixed things yet. Rather, it makes rational discourse impossible. That’s why Ms. Cliffe’s comments brought my mindless entertainment enjoyment to an aw c’mon! halt.

Ms. Cliffe’s comment takes a casual dig at the realistic fears of fathers who just want to be in their kids’ lives equally, or at all, for that matter. A more compassionate and understanding observation might be:

Isn’t it sad that some men and women stay in painful and even abusive relationships for longer than is healthy because they fear their relationships with their kids may be irreparably damaged or lost?”

It’s not as quippy or gender war baiting, but what do you think?

It’d be nice to have discussions about this that don’t devolve into poo flinging between feminist groups and men’s rights groups, or that use words like patriarchy, hypergamy, Marxism, nanny state, other gender studies terms, religious scripture, etc. Yes, there are feminist groups who lobby hard to keep the family system unequal, which is antithetical to their professed beliefs even though they’ll likely never admit it.

In reality, they’re hurting the women they claim to support. I work with adults, some of them women, who were raised by abusive mothers that ran the fathers off. No, not all of these fathers were saints, but many of their fathers weren’t abusive or crazy. They’d have been better off with their dads if only for half the time.

I’ve yet to read a reasonable explanation for why feminist women’s groups don’t support equal parenting. Men are not inherently more likely to abuse than women. Mothers are not more important to raising healthy kids than fathers. Empirically validated research simply doesn’t support either of these assertions.

In fact, feminist theories on this subject are every bit as crazy as opposing theories positing all women are morally compromised children who should be stripped of voting and other civil rights. Don’t know about you, but as soon as I encounter articles or comments espousing either points of view, I stop reading. Why? “You should never argue with a crazy mi-mi-mi-mi-mind” (Billy Joel).

People can divorce without the intentional infliction of pain and destruction if they make the conscious choice to do so. But when one or both partners are intent upon on it, you won’t find a finer battleground than Family Court. I wish the courts would recognize that, absent actual evidence of abuse (not one person’s word against the other), the parent demanding majority or sole custody is typically doing so either to hurt the other parent or for financial gain. It’s unreasonable and the individual is demonstrating their unwillingness to co-parent right from the get go. It doesn’t make sense that the parent hellbent on destroying the other parent should be the custodial gatekeeper, does it?

Can we try having a conversation, either here or on the Shrink4Men Facebook page, that discusses these issues without invective? Without anyone storming in and saying, “You’re WRONG because my personal experience is different!” This isn’t about your individual experience. It’s about what’s happening at a high rate in the general population. When you do that, you demonstrate that you’re not open to having a thoughtful, compassionate, solution-focused discussion. You know who really profits by making parenting and divorce a gender issue, right? Attorneys and other court apparatus.