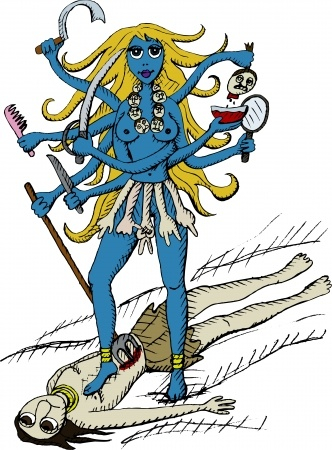 It’s day 27 of Domestic Violence Awareness Month for men and boys, the invisible victims of domestic violence. “Luke” thought he had met the love of his life — a mother of two, a writer and a yoga instructor. On the surface, she seemed to have it altogether. Then, on a once in a lifetime holiday, she went from Sun Salutation to Downward Facing Crazy Bitch.

I met her in 2006 when I came to her yoga class. Yes, you read that correctly: she is a yoga teacher. Someone who is supposed to be an example of peace, serenity, and kindness.

I’ll never forget the day I met her. She seemed so kind, so put together, a breath of fresh air, a departure from the other women I’d dated. It felt so great at the beginning, so perfect that I’d happen across this person.

Little did I know that I had just gotten on the biggest rollercoaster of my life.

Things progressed relatively quickly. We went on trips together, made passionate love like there was nothing else in the world to do, everything was a joyous occasion. We spent so much time together.

Two months in the relationship, she told me she loved me: looked deeply into my eyes after sex and said this.

I had planned on taking a trip around the world by myself. I realized that I wanted her to come.  I asked her if she’d accompany me.

That was a huge mistake.

The trip went as such: on a regular basis, she accused me of “not acting like a man” on a regular basis, for any arbitrary reason she could find. We would see other couples happily having meals and she’d get angry we weren’t like them. We fought constantly and afterward she would be angry that I wouldn’t approach her and initiate sex. It got to the point where we’d go to bed angry, she’d refuse my advances, and then be furious in the morning we hadn’t made love (this became a major part of the relationship in the future).

It got so bad I broke up with her. In a foreign country. I was miserable. She seemed miserable. I couldn’t figure out why it wasn’t working, but it certainly was not good for the either of us. She didn’t want to go along with any of my plans, she constantly was belittling me and chiding me, and I felt that I was seeing her true colors – and it wasn’t pretty.

We agreed to be amicable the rest of the trip. It was agonizing. On a trip I’d waited years to go on, I was counting the days to my flight.

At the airport, she broke up with me, with much finality. I welcomed this. We were getting on different flights to different places so I found myself nursing a beer in an airport bar wondering just what in the world had just taken place, half thankful for dodging a bullet, and half sad because I had liked her so much.

I got off my flight a dozen hours later to countless emails from her. Apparently on the way back to the states she’d had an epiphany – and that epiphany was that we were actually meant to be together, and she admitted that she’d been out of line on the trip.

I returned home soon after that, and things progressed. We got back together. Everything seemed to be going swimmingly.

I really let some behaviors slide that, in retrospect, were absolutely asinine. She had a close relationship with a male friend that was completely inappropriate, and once we broke up and he shared his feelings of love with her. When we got back together (the breakup was a total of two days) she didn’t sever or change this relationship. In fact, she kind of kept it on the back burner as a bargaining chip whenever things got messy with us “I feel like HIS love is unconditional, HE understands me, etc, etc”

I spent the majority of my time trying to patch up our relationship and figure out if it was something that was long-term, or just a really big mistake. I had fallen in love. I told her I loved her regularly. It was never enough. Nothing was ever enough. She would state exactly what she wanted and needed from me in reference to affection, attention, and support. But she wouldn’t do the same with me, she stopped doing all the sweet and thoughtful things she’d done at the beginning of the relationship.

Jealousy became the theme of the entire relationship. Waitresses, friends, mutual acquaintances, women in general – they all were potential objects of my affection. I learned to not let my eye stray EVER when she told me that I had a “wandering eye”, and was always ogling the opposite sex.

Then the writing started. She was a talented author and had a blog with a relatively considerable following. I was overjoyed for her at first that she was so successful in this realm, and then it got strange. Every time we got in a fight or she found something she disliked about me, it somehow made its way into her newest blog post. It seemed that she’d indirectly attack me publicly through this new means of leverage she’d gained. People couldn’t believe what an awful, unsupportive, unloving boyfriend she had. They validated and supported her. I began to realize people who hadn’t met me and followed her writing easily put two and two together (like I did): I was the subject of these writings.

I put my foot down. I asked her never to write about me. She feigned concern, told me that I was ridiculous for thinking that anything she ever published was even indirectly about me.  Everyone I knew acknowledged it was, of course.

But the unfounded accusations continued. Anything I did, anyone I talked to, how I spent my time: they all were questioned.

I became perpetually shell-shocked. My family began to worry about me. They asked me to distance myself from her for my own sanity and safety.

Months later came the last straw for me. An entire weekend was spent with her talking about all the women she knew I’d cheated on her with in the past, all the lies she perceived I’d told, and how I hadn’t done “what a man needed to do” to make her feel loved, feel beautiful, feel needed in the relationship.

What did I do? I should have just let go right then and there. I was so exhausted. But I so desperately wanted to make it work, it seemed like that woman I fell in love with was just around the corner, I just needed to prove myself. I asked her out to dinner. Maybe a date would help the situation.

It didn’t. After she started drinking she began berating me again, this time with me starting to raise my voice, and her likewise, causing a scene in a restaurant we frequented. The night out ended in her screaming at me across a parking garage that I was “not a man”.

I told her it was over, asked her to get out of my car as I dropped her off. She wouldn’t get out. I was totally taken aback at this point, because she was totally unreasonable. At one point, a close friend had suggested I record her whenever she flew off the handle so I knew that it happened and didn’t just ignore it anymore. I started the voice recorder on my phone.

She saw from a distance that I had my phone out. “Who are you texting?” she screamed. She promised to finally exit my car if I came inside and talked to her.  Inside her house, I tried to leave several times since the argument grew more heated and she’d push me and force the door shut. “You aren’t leaving” she’d say, physically blocking the door. I tried to leave over and over until she finally stole my phone, screen still lit, out of my pocket, and ran to the bathroom.

There I stood outside her bathroom door as she perused my phone. As you can imagine, this was greeted with an extraordinary amount of screaming and name-calling.

I absolutely lost it. As a man who has never been in a fight, hit any human nor animal, broken anything on purpose or damaged property – I kicked down the door.

She was so startled by what happened that I was able to pry my phone out of her hands and sprint out of the house, get in my car, and leave.

I called my parents, my brother, my sister, everyone, hysterical. I had never felt that way in my entire life.

I started getting voicemails from her, ranging from “I love you, please come home” to “I called my ex and told him everything, he wants me to call the police and have you arrested”.

I tried to pay for the door and told her I never wanted to speak with her again. She varied wildly in our conversations after that, moving between saying that I had violated the sanctity of her home, and that I needed to get help, that I was “violent”….all the way to saying we needed to go to counseling, and there was hope for us yet.

I shut down. I couldn’t ride the rollercoaster anymore.  I put in my month’s notice at my apartment, packed my things, and left. In one of her past conversations she’d promised she’d never tell anyone about the night with the door, that was way too damaging to my character.

As you can guess she wrote an article about it for everyone we knew to see. Anybody who knew her personally was able to identify who I was. She wrote about how I am an emotionally vacant man, someone who isn’t able to provide anyone with a decent relationship. The article currently has tens of thousands of views, with dozens of comments validating how great of a person she is, and how much of a saint she was for putting up with this awful, abusive, violent excuse for a man.

The prologue of this long-winded journey is this: trust your intuition. You really can identify these people immediately – not by the things they say or the way they act – rather, your reaction to them. If you find yourself constantly scrambling, defending your honor, trying to please them – all while they sit back and reap the benefits – YOU ARE IN AN ABUSIVE RELATIONSHIP.

I wish I knew then what I knew now. I hope my saga helps someone.