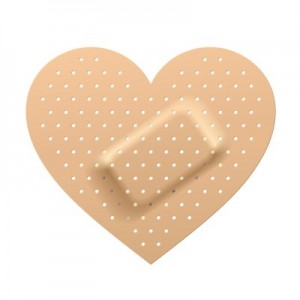 On the Shrink4Men Forum, we refer to abusive wives, girlfriends and exes as CBs. CB can stand for CrazyBritches, CrazyB-tch or Cluster B (as in Cluster B personality disorders — Borderline, Narcissistic, Histrionic and Antisocial).

Valentine’s Day can be a downer if you’re alone or, even worse, if you’re still with your CB. As many of you know, Crazy often implodes on and around holidays and other special occasions.

For those of you who are still with your CB, stay safe and remember, no matter what you do, you can’t win. Therefore, I suggest a modest bouquet of flowers and a card if you must pay tribute to “pharaoh.”

For those of you who are waxing nostalgic and missing your Crazy Ex this Valentine’s Day, Shrink4Men is proud to bring you the CB Patch.

What is the CB Patch?

It is the brainchild of CrazyBuster, Micksbabe. In a nutshell:

I wish they would invent some sort of patch to wean yourself off of a CB. Like, when you are sitting at home, lamenting about how much you miss the “good times,” the patch would jump off your arm, kick you in the crotch and call you a loser.