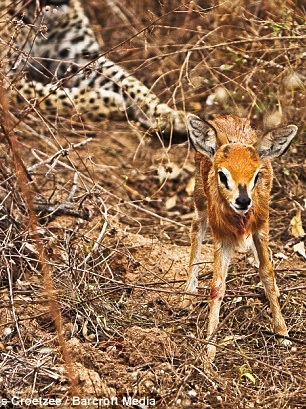 Earlier this week, I read an article in The Daily Mail that started out as a heart warming tale, but ended rather cruelly. The cruel ending did not surprise me, but left other readers angry and in despair, at least according to many of the comments left on the original post.

From Don’t Play with your Food: What Happened When a Leopard Befriended a Cute Baby Antelope:

This at first apparently playful encounter between leopard and newborn steenbok (part of the antelope family) was captured by a safari guide in the Sabi Sand Game reserve, in South Africa.

The big cat seemed to want to make friends with the calf for 45 minutes and the small creature was so unafraid of the predator it even tried to suckle milk from it.

The predator lures its prey close, using subterfuge. The cat appears friendly, playful and nurturing. The baby steenbok, most likely missing its mother, ventures ever nearer.

It’s not so very different with human emotional predators. They cajole, beguile and put on their Dr. Jekyll face in order to draw you in and gain your trust and affection. Why? All the better to feast upon you, of course.

More from the article:

But then nature took its course and the leopard decided playing with the Bambi lookalike was probably not as much fun as eating it.

In a flash, he killed the newborn, which had foolishly ventured out into the brush after being hidden in a nearby bush by its terrified mother, who was powerless to intervene.

Safari guide, Marius Croetzee, 30, from Durban, was travelling by Land Rover he and his clients witnessed nature at its most heart-wrenching from only six yards away.

Yes, this is a sad story, but it provides an important reminder. Predators engage in predation. Abusive personalities and individuals with sociopathic traits are predatory. Sure, they can appear warm, friendly, loving, charming and benign at times, but before very long, their brutal and crazy-making aspects will surface if you allow them to pull you into their sphere, e.g., via a Hoover.

If you are involved with the emotional equivalent of the leopard in this story or a rattlesnake, don’t be surprised if you end up with their proverbial fangs sunk into your jugular.

Don’t be the baby antelope.