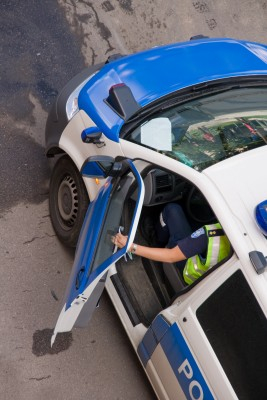 In November 2011, Mark called into the Shrink4Men Radio program and was challenged by Denis, one of the listeners in the chat room and a regular here on the Shrink4Men website. The dialogue that began on the radio program continued here. The following post is a compilation of Mark’s responses to Denis’ questions and assertions. I asked Denis if he would like to respond in article format. Instead, he has opted to respond via comments. — Dr T.

Denis (11/08/2011 at 9:46 am): I’m looking forward to an article from you on your DV training, dominant aggressor profiling and mandatory arrests. Anecdotal evidence that you have arrested women in the past does not discount the reality of your anti-male training and procedures and resulting disparity in arrest statistics. I’m also curious how you can look yourself in the mirror each morning and tell yourself that you’re just doing your job.

DV training is based on the Illinois Domestic Violence Act of 1986 (IDVA).

Department policy mirrors the IDVA. We must investigate and document even if no arrest is made. Arrest is mandatory under certain conditions. Victim assistance is mandatory. Emergency order of protection, if needed, is mandatory.

In 1990 or 1991, the law changed to mandatory arrest. Prior to that, it was must investigate and document, but arrest without a signed complaint was almost nonexistent. This was good and bad.

Good in that police could arrest for the really obvious stuff without the signed complaint. Bad in that the courts added, “bond to be set by a judge” to the mandatory arrest part. Doing this ended police discretion in making an arrest. It also began the time of suckage.

The court and state’s attorney (SA) backed off on the arrest part because, without discretion, police were arresting the wrong people for the wrong reason, all too often. Now we screen the cases with the SA and quite often the arrest results in no charges. You might not go home for the night, but you ain’t going to jail.

As for doing my job, I have two options as a police officer in resolving disputes. I can counsel or I can arrest. That is it.

As long as I have probable cause to arrest, I can rarely get in trouble for making an arrest. Arrest is, in the case of domestic violence situations, the least desirable, most dangerous and time consuming option. Making an arrest also punts the problem to the courts.

In my opinion, IDVA took away discretion in too many cases. The SA’s office will charge when in doubt, almost always. They don’t want to get trick bagged by not charging and neither do most cops. It is a CYA (cover your ass) thing. I’m not saying it is right or good . . . it just is.

Disparity in arrest results? The following is only my informed opinion. Men are conditioned from an early age to protect women. It seems to be a hard wired response and that is rooted in religion and culture, especially in the western world.

Men also tend to land punches more accurately and hit harder, which leaves visible marks. So a woman hitting a man is blown off (by the victim male) and, without visible injury, it is tough to make an arrest. I’m not saying it doesn’t happen, but with an uncooperative or unwilling victim, no visible injury and cultural bias engaged in by all parties present, things get screwed up.

DV training has gotten a bit better. There seems to be less emphasis on man hating and more on uniform procedures and arresting the true offending party. I won’t start to try to explain the procedure for sex assaults. That’s a whole other article. And yep, you guessed it,  more suckage.