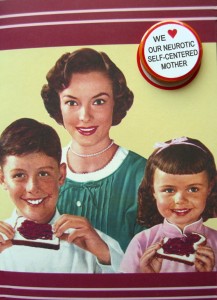 All hail the Golden Uterus! I am YOUR MOTHER. I am THE CHILDREN’S MOTHER. This is MY DAY!

My memories of Mother’s Day are benign. I remember making cards for my mom and trying to cook breakfast when I was a child. We’d say, “Happy Mother’s Day,” hug her, give her flowers and go out for breakfast (after she pretended to enjoy the bowl of Cocoa Pebbles I served her in bed). It wasn’t a day long event during which we paid tribute to Pharaoh nor should it have been. After all, it’s a Hallmark holiday for Pete’s sake.

Over the past few decades, Mother’s Day has taken on the significance of a high holy holiday in our culture. Retail stores and advertisers begin pushing it earlier and earlier and many men experience anxiety about not providing a “perfect” Mother’s Day as if it were Valentine’s Day (another bogus non-holiday), a birthday or an anniversary.

It’s nice to have a special day for both mothers and fathers to receive appreciation for loving, being there for and taking care of their children. You know, what parents are supposed to do. However, there are some women who use Mother’s Day as a reason to torture and control their children, husbands and ex-husbands.

Mother’s Day becomes another dreaded holiday for many families. They live in fear of not meeting unrealistic expectations and disappointing mom/wife. Healthy families appreciate one another throughout the year and don’t need to go to great lengths to “honor” mom. It seems like the kind of women who make a huge deal out of Mother’s Day—demanding recognition, appreciation,

extravagant gifts, public demonstrations of affection/allegiance/gratitude—wouldn’t cut it as candidates for Mother of the Year. They want accolades and thank you’s from their kids and husbands on Facebook. Personally, I think that’s nuts.

They believe the very common act of giving birth (dogs do it, cats do it, even rats do it) is an act of such cataclysmic importance that all humanity should bow down at their feet, let them use handicapped parking spaces (true story) and worship and give them special privileges and reverence just because they’ve reproduced. If only the physical act of giving birth could automatically make someone a good mother and a good person. Simply put, it doesn’t. In fact, becoming a mother can make a controlling, abusive, entitled, crazy woman even worse than she was pre-baby.

Abusive women, particularly narcissistic, borderline and histrionic ones, view their children as extensions of themselves. Children are property and are treated as such when these women divorce. You see this in parental alienation cases all the time. 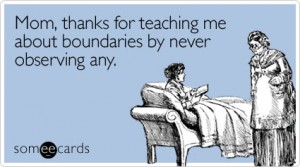 If Mommy hates daddy, then the children must hate daddy because they are Mommy’s children. If the children love their father and, god forbid, he begins dating or gets remarried, double god forbid that the children treat dad’s new partner with respect.

Heaven protect the children if they actually like or accept the new girlfriend/wife. That would be a betrayal of Mommy. It’s a dysfunctional and abusive parent-child relationship when the child’s job is to make mommy feel good.

Here is a real life, horrific bad mother Mother’s Day example from a second wives group I frequent. One of the women heard this exchange between her step-daughter and the biological mother on Mother’s Day:

The step-kids were supposed to go to their mother’s (BM) house “first thing in the morning” on Mother’s Day. BM never gives us a specific time, but she typically isn’t ready for the kids to come back any earlier than 3pm.

Step-daughter (SD) started calling BM at 9am to see if she was home. If BM has gone out on Saturday night, we never know where or when she’ll turn up.

SD must have called every 15 mins until she finally got a call back from her mother at 11:30 AM. SD had the phone on speaker and was in the next room. I was getting lunch started and heard the whole thing. BM started the call by screaming at her daughter. She just went on and on, rehashing the same conversation.

BM: Why weren’t you home this morning?!

SD:  I was calling, you didn’t pick up. I didn’t know if you were home.

BM:  Well you should have been dropped off!  You promised me you’d be here!

BM: Well, I was! And now you ruined Mother’s Day!  MY DAY. This is MY DAY and YOU ruined it! [*She was screaming the whole time, but the words in caps were extra loud.] You just do whatever you want all the time and you don’t even care about me! All I have is this one day! Just stay the hell there with your father. I don’t even want to see you!

Then BM hung up on her daughter only to call back an hour later for round 2, screaming and crying again. I could hear the spit flying from her mouth into the telephone receiver. She launched into SD, “I need to see you before I leave for work. I have to start getting ready now, so I’ll hardly see you!” She screamed all of this while insanely crying. SD told her she’d be home and I dropped the kids off shortly thereafter.

Keep in mind that BM called around 12:30 and doesn’t have to work until 6 PM. The kids will have dinner at the bar where she works while she’s working. BM had nothing planned with the kids other than dinner on Mother’s Day.  She didn’t ask for a specific drop off time and I finally stopped the driving around town game and won’t get in the car till we know she’s home.

Furthermore, if BM woke up at 9 am, why didn’t she call or answer the phone? If she was home, she was sleeping anyway, so what’s the big damn deal if they weren’t there “first thing?” This is the same woman who made an equally huge drama when SD wanted to go to a birthday pool party a few weeks ago and complained non-stop about not having one day to herself. Boo freaking hoo. Happy Mother’s Day.

What stands out to me is how the “mother” is acting like an out-of-control child and her 10-year old daughter is behaving like the responsible adult. Many children of emotionally unstable men and women become parentified—the child becomes the caretaker of the parent—and make no mistake, this is child abuse. A parent is supposed to soothe the child; not the other way around.

Last week, a Shrink4Men community member asked how he should tell his son that his mother didn’t want to see or hear from him on Mother’s Day as punishment for living with his father.  Here’s Gottagetout’s comment:

Mother’s day is coming up. One of our children lives with me. My ex wants absolutely nothing to do with him, partly because she blames him for us living in seperate houses now. Part of the reason we split up is because I just could not put up with the damage I saw her doing to him any longer. It was easy for me just to stay at work for very long hours and put up with her less, but he, along with our other children, were stuck with her, which was very unfair to them. It seemed like every minute of every day he lived with her, there was another huge fight as he was her main target.

He asked me if he should get his mom anything for Mother’s Day. I asked him what he wanted to do and he said he wanted to get her something, but thought she would just throw it away. I asked my ex about it and at first she said she would not do that. I later got a message saying that she thought about it and she does not want him to get her anything at all and does not even want to see him on that day because he needs to understand and take responsibility for what he did and this is the way he wanted it. She said that he is “almost 14 and not a child anymore” (Really!) I know this is going to hurt his feelings a lot and I know there is nothing I can do about that part of it but I feel so bad for him. I have not told him about this yet. I am trying to think of a way to tell him.