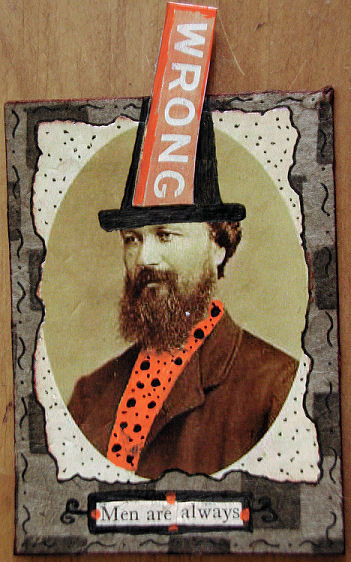 “Men aren’t good at expressing emotions.” “Men only talk about sports.” “Men need to be more sensitive.” “Men are all jerks.” We’ve all heard these  platitudes and they’re grade-A nonsense.

There’s an ever rising population of aggro men in this country and women have no one to blame but themselves. Men are hurt, angry and confused- even if they don’t know why- and with good reason.

1) Men have emotions. Women need only adjust how they listen. Men express plenty of feelings; they just do it differently than women and there’s nothing wrong with that.

You know how Eskimos supposedly have 4 dozen words for snow? It’s the same thing for women and feelings. They have over 4 dozen ways to describe happy, angry, sad–4 dozen reasons why they’re mad at their co-worker today.

2) Men are more solution-focused while women are process-focused. There have been numerous studies (of questionable methodology) asserting that women use more words than men per day. Recent research finds such assertions are unfounded. Men and women actually use about the same number of words a day. It’s not a matter of women being more verbal; generally speaking, we’re equally verbal.

Society doesn’t tell women, “Hey, instead of blathering about your feelings and problems all day, why don’t you get off your ass and do something about them.” I don’t walk around saying, “I don’t know how to fix my car,” like I’m an abnormal defective. Yet, I’ve heard countless men parrot, “I’m not good at talking about my feelings” in a tone that sounds like they’ve been beaten into submission. Women say this to the men they supposedly love without batting an eyelash and men just swallow it. Can you imagine the female outrage if men did the same thing to women by saying, “You’re not good at being rational.”

Thirty years ago, Psychology became “feminized.” Women entered the field in droves in the late 1970s. Now, women greatly outnumber male mental health professionals, and let’s face it, the men who enter the field may as well have a uterus, that’s how estrogen-ized the field has become.

The Lie and the Truth

They don’t want men to be unfeeling robots, but want them to be men–strong and reliable, yet capable of tenderness. The result? American men, once stalwart bull mastiffs, turned into angry confused Pekingese drowning in a sea of mixed signals unleashed by women.

I sympathize with men. As a group, they were put into a no-win situation by women who didn’t understand their changing roles or what they wanted.

Accept and embrace the differences. Why swim upstream? It’s a lot easier to appreciate and desire men in all their glories and faults, then to try to make them become “like us.” It makes relationships easier. It makes life easier. It makes it easier to forgive and to love.