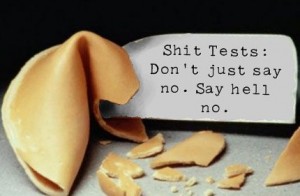 Do you ever feel like you’re being tested in a relationship to see just how much garbage you’ll put up with? Does her voice start sounding like fingernails on a chalkboard? Do you often want to pull your hair out and scream “What the heck will it take to make her get off my back??!!”

Sh*t testing, also known as testing another person’s boundaries via nagging, criticizing, shaming, guilting and manipulating is considered by many people to be a normal part of relationships. It isn’t. It’s “normal” in dysfunctional and/or abusive relationships, not healthy relationships.

Immature women and men both engage in boundary testing. Many non-disordered people, men and women both, have trouble explicitly asking that that partner meet their needs, which is often when these kinds of behaviors occur. If a person can own their needs and feelings and feel okay asking for them to be met, than manipulations like shit tests become unnecessary. This BlogTalkRadio program, which aired in March 2012, discusses these issues.