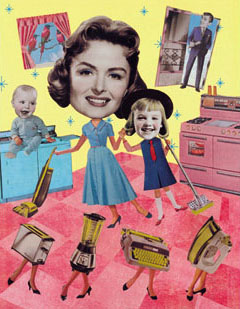 You’ve used logic, reason, ultimatums, bargaining and begging to no avail. Your wife still won’t go back to work even though the kids are in school full-time. You may ask yourself why she spent time and money on an education only to unempower herself by becoming financially dependent upon you. It’s a valid question.

Being at home for the kids after school, shuttle services and taking care of you are plausible excuses, but they are excuses and flimsy ones at that. Let’s be honest, has your wife achieved Donna Reed status or does she complain about the menial aspects of housekeeping, cooking, laundry and driving the kids everywhere? Do you eat a lot of takeout food and pre-prepared meals?

So what’s the deal?

By voluntarily giving up her career and making herself dependent, she’s infantilized herself and placed an unfair burden on you. Also, if you have a daughter(s), what kind of role model is she setting? Why should you encourage your daughter to go to college much less save for tuition when mom doesn’t use her degree(s)?

Your wife is another dependent, just like your children.

Except that your wife isn’t a child. She’s an adult who refuses to grow up in this respect. Women with a modicum of intelligence aren’t happy in this role. They’re stuck; trapped between an insistent, unrealistic wish to be taken care of, the desire to be recognized as an equal and their fear of being an independent adult.

Your wife’s wish to be taken care of and dependency on you will eventually breed resentment and anger in both of you. She’s angry and resentful about needing you and you’re angry and resentful because you’re shouldering the burden and she’s mad at you because of it. Crazy, isn’t it? This is called hostile dependency.

Why does this happen?

Because no matter how powerful her childish wish for security is, SHE IS AN ADULT, which creates an unconscious conflict within her.

These people are unaware of their dependency needs and often will loudly proclaim how independent they are; at the same time, their behavior reveals their need for a parental relationship with others who are emotionally important to them. Developmentally, they’re adolescents and resent their dependency on their parents who embarrass them, often disgust them, and constantly fail them by virtue of their shortcomings as human beings.  Adolescents have a number of developmental tasks to perform before entering a psychologically healthy young adulthood.  They must give up… the feeling that all options are open to them; they can no longer hold the fantasy that they can grow up to be whatever they want.

One must give up the passive wishes to be taken care of and nurtured.  To be independent is hard work and facing true independence (not the pseudo-independence of the child who screams “I don’t need anything from you” right before they storm out of your house and drive to their friend in the car you pay for) is frightening. The comfort of knowing someone will always be there to take care of you and make everything all right is not easily given up; and once given up, the knowledge that there is no one standing between you and the dangers in the night is potentially terrifying. . . Furthermore, because these people are responding to conflicted, unconscious dependency needs, it is literally impossible to satisfy them.

Here’s the problem: A child cannot be an equal partner to an adult. An equal relationship requires that both partners be  whole, with their own fully developed identities.

If she wants to be seen as an equal, she needs to be an independent adult in every sense of the word. You can’t be truly independent when you’re taking care of yourself on someone else’s dime. Children get allowances for doing chores, so they can go to the mall; adults earn paychecks to support themselves.

Why is it important that your wife work?

Standing on your own two feet is scary, but it’s a developmental necessity. It’s part of being an adult and an equal partner. I hope for your sake and hers, she can do the psychological work and go to work.