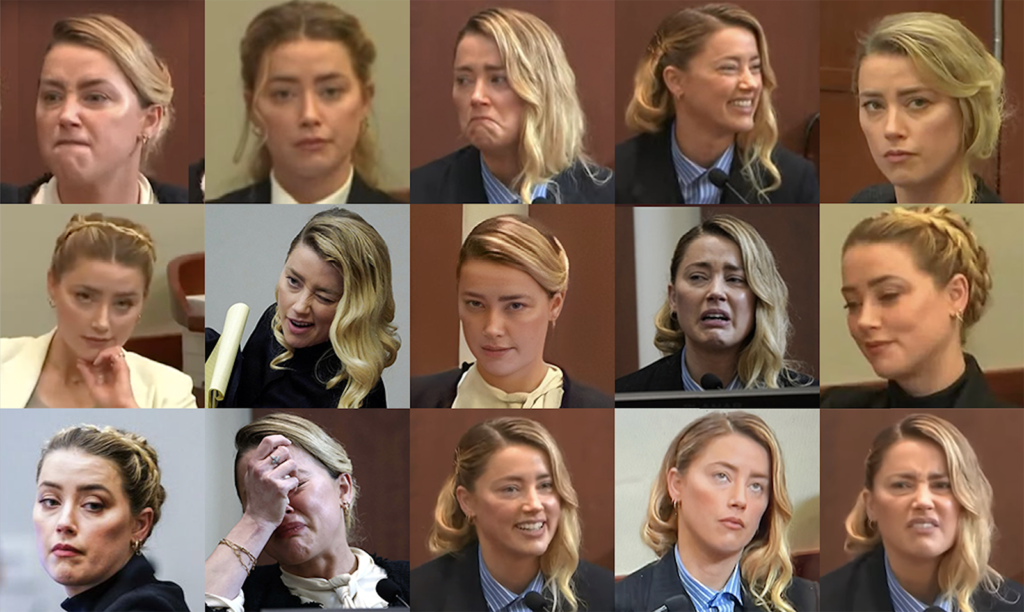 Amber Heard is a liar, so what? She’s a personality disordered pathological liar. However, there isn’t anything extraordinary about her. Except for the global attention and obsession her never ending, ever changing lies have garnered from the general public and their respective Depp vs. Heard fan bases.

Amber Heard is a liar. As are many of the equally personality disordered women (and men) who lie and smear my clients to their children, family, friends, colleagues, employers, family court and law enforcement for material gain and personality disorder pathology-driven emotional reasoning. This happens every day, year in and year out.

Amber Heard is a liar, so what? What she’s doing is nothing new. Albeit, the overwhelming and unrelenting public outcry over her kind of female predation is new.

I have a question.

Where have all the Johnny and Jenny Come Lately’s been while the merciless and often gleeful destruction of men, fathers and children has been occurring? It occurs in plain sight, day after day, year after year. Again, this is nothing new.

I’m happy you now know that false abuse allegations are another form of abuse. Welcome to one of the most reviled and maligned groups on the Internet!

It’s fantastic that male abuse victims are finally being recognized and — what I hope isn’t meaningless lip service — offered support. If not by the mainstream media, at least by social media.

Nevertheless, where have you been?

I first became aware that men are just as likely to be abuse victims as women during my Clinical Psychology Doctoral training. Listening to male clients describe relationships with girlfriends and wives, I could hear abuse in all its forms. Verbal, emotional, physical, sexual, reproductive and financial.

(*Lying about being on birth control is a form of reproductive coercion as far as I’m concerned.)

Abuse that the fields of psychology and social work and the domestic violence industry call abuse when women report them. Back then, I wondered why neither my professors nor the staff at the women’s domestic violence shelter at my Masters program internship discussed the existence of male victims. Or rather, why male victims were only acknowledged with The Burning Bed caveat.

From what I can tell, the bias and denial toward male abuse victims in Psychology and Social Work are far worse now. During my training (1995-2001), the existence of male victims was largely ignored. Presently, they are held in derision and blamed for the abuse they experience. Toxic masculinity, anyone? This is done using quack gender studies theories and other new wave feminist dystopian misandric hogwash.

These gender theories aren’t true of the male victims I worked with during my doctoral training. And they aren’t true of my clients today some 25+ years later.

Every now and again, a narcissistic/borderline man ends up in my tele-therapy office. These are the guys who who became involved with a similarly narcissistic/borderline woman, got a taste of their own fuckery and didn’t like it. As I strongly encourage personal responsibility in my therapy practice, these individuals usually don’t last very long with me.

The majority of my clients are typically men with codependency and trauma bond histories beginning in childhood with a highly dysfunctional and likely personality disordered parent or parents.

Attacked for being a resource for abused men.

I began Shrink4Men in January 2009 (shrink4men.wordpress.com). At the time, I didn’t realize my resource for men would be so controversial and provocative. After only a couple months, a woman self-identifying as having BPD and claiming to work for NAMI (National Alliance for the Mentally Ill) began to attack me in the blog comments section.

She deployed all the classics – shaming, name-calling, concern trolling, stating I have “daddy issues,” which motivates me to seek male approval. And accusations of “stigmatizing” people with BPD.

When BPD lady became especially verbally abusive, other blog followers called her out. They asked what NAMI would think about one of their alleged Consumer Advocates spewing such vitriol under the auspices of the organization’s name.

She apologized and stopped. But only after justifying and rationalizing her verbal attacks by blaming me for triggering her. Sound familiar? NPD/BPD/HPD’s abusive behavior is rarely if ever their fault and is their target’s responsibility. This woman was just my first detractor.

Since then, many others have name-called, mischaracterized and inaccurately analyzed me.

According to the Mixed Nuts Chorus, I’m a misogynist, a cunt, a hate monger and a “traitor to my gender.” Also, “There is a special place in hell for women who don’t support other women.” To clarify, I support other women. Just not the ones who are lying, malicious, unrepentant abusers.

At one point in 2010-2011, after an especially vicious round of coordinated attacks by a group of self-identified feminist BPD women and men, I almost took down my original blog and website. I became depressed and afraid to publish new material. Even so, I maintained my practice and kept going with my writing as best as I could.

I’m long past that now. Subsequently, I have the hide of a rhinoceros. What’s more, I could give a flying fudge what detractors think and feel about me and my work. I’m still here. Helping my mostly male clientele, and educating and advocating for male abuse victims. (*I work with women, too.)

Men are more likely to be doubly abused.

Male victims (like Johnny Depp) are first abused by their intimate partners/exes, and then by the courts, family, friends and society in general. Look how much time and money it took Johnny Depp to be listened to and believed. Most men don’t have the Pirates of the Caribbean money it takes to combat false allegations.

Abusers almost always accuse their victims of being their abuser, so it can be confusing. There are certain “tells” that I recognize in my practice. For example, actual victims typically exhibit hyper-responsibility, self-blame and consistency in their self-reports.

In a tri-fuck-ta of projection, gaslighting and DARVO, many of these men face the additional abuse of false accusations of abuse, and all that it entails.

How does this happen?

Amber Heard is a pathological liar with personality disorders. There are countless women (and men) just like her. The courts and society aid, abet and protect these women just as they have done for Amber Heard. Furthermore, these systems and special interests don’t care what hashtags are trending on Twitter. (*The legal system is more prone to enable female false accusers then their male counterparts due to bias, but it does happen to female victims, too.)

Amber Heard continues to malign and abuse Johnny Depp, enabled by special interests with big moneyed political and mainstream media connections. This isn’t so different from the run of the mill borderline, narcissist and histrionic lying abusers who are just as enabled, but on a less grander scale.

The not high profile Amber Heard’s are also enabled by friends, family and other negative advocates (i.e., flying monkeys). Some of these people are well meaning individuals who believe the Amber’s lies. Others are equally toxic people with similar personality disorders.

Amber Heard is a pathological liar and has two personality disorders. There’s nothing special about her. She’s just another “sociopathic show pony” – gotta love Depp’s invective. Why do women and men like Amber Heard wage these false victim narrative smear campaigns?

It’s a confluence of variables. The most common are:

Most interestingly, some professional victims — i.e., people who seek attention, power and money by playing victim — have, in some instances indeed suffered some kind of abuse. The research on the tendency for interpersonal victimhood by Gabay, Boaz et al (2020) find that many professional victims have not suffered abused. Rather, they’re aggressors who hide their abuse by claiming to be victims.

Amber Heard is a liar, so what?

New trending hashtags like #MenToo and #AbuseHasNoGender are all well and good. Will they lead to real world legislative change in family law? Will it finally put an end to the many times debunked Duluth Model and primary aggressor model?

Eventually, the social media feeding frenzy surrounding Amber Heard and Johnny Depp will fade. Will the millions of highly vocal Depp and #BelieveEvidence supporters convert their voices into boots on the ground lobbying to reform Family Law? Not to mention the use of ex parte motions, which is rife with abuse by the Amber Heard’s of the world?

For what it’s worth, not all women who take advantage of the broken system are personality disordered. Some are non-disordered, unscrupulous opportunists who take advantage of the system for extra child support. They don’t alienate the kids beyond obtaining the restraining order in which they accuse their father of being an abuser. You’re still an asshole if you do this in my opinion, however.

Will this new found support for male victims make a difference? I don’t know – I hope so.

Meanwhile, I’ll be here. Doing what I’ve been doing since 2009. Helping men in abusive relationships in all of my misogynistic, gender traitor, pick me girl, cunty glory.

If you’re new to wanting to support male victims, there are some other folks it’d be good for you to know about. They’ve been in this fight for decades. Many of them have also been grossly mischaracterized and vilified for their advocacy.

Erin Pizzey is a pioneer who established the world’s first domestic violence shelter. She was later pushed out and denounced by the very shelter system she founded. Why? For insisting that the problem of female abusers be acknowledged and that male abuse victims receive support services.

Dr. Warren Farrell, PhD is considered the father of the men’s movement. He’s also the author of several books including the seminal The  Myth of Male Power and The Boy Crisis.

Harry Crouch, NCFM (National Coalition for Men) is a tireless advocate for men, their children and the women who love them.

Marc Angelucci, a colleague and friend of Mr. Crouch, was an equally relentless advocate attorney for male victims. During his tenure at NCFM, he took on cases involving paternity fraud and male victims of domestic violence in California. He was tragically murdered outside of his home in June 2020. I will remember him most fondly performing karaoke to AC/DC’s Big Balls at a conference we both spoke at in 2014. I thought he was so awesome I slipped the deejay $20 to play it a second time.

Carnell Smith has championed male victims of paternity fraud. He helped rewrite legislation in his home state of Georgia to combat paternity fraudsters and help their victims.

These are just a few individuals who have long worked to make a difference to male victims and their families. There are others, and I encourage you to seek them out if this is truly a cause you want to champion.