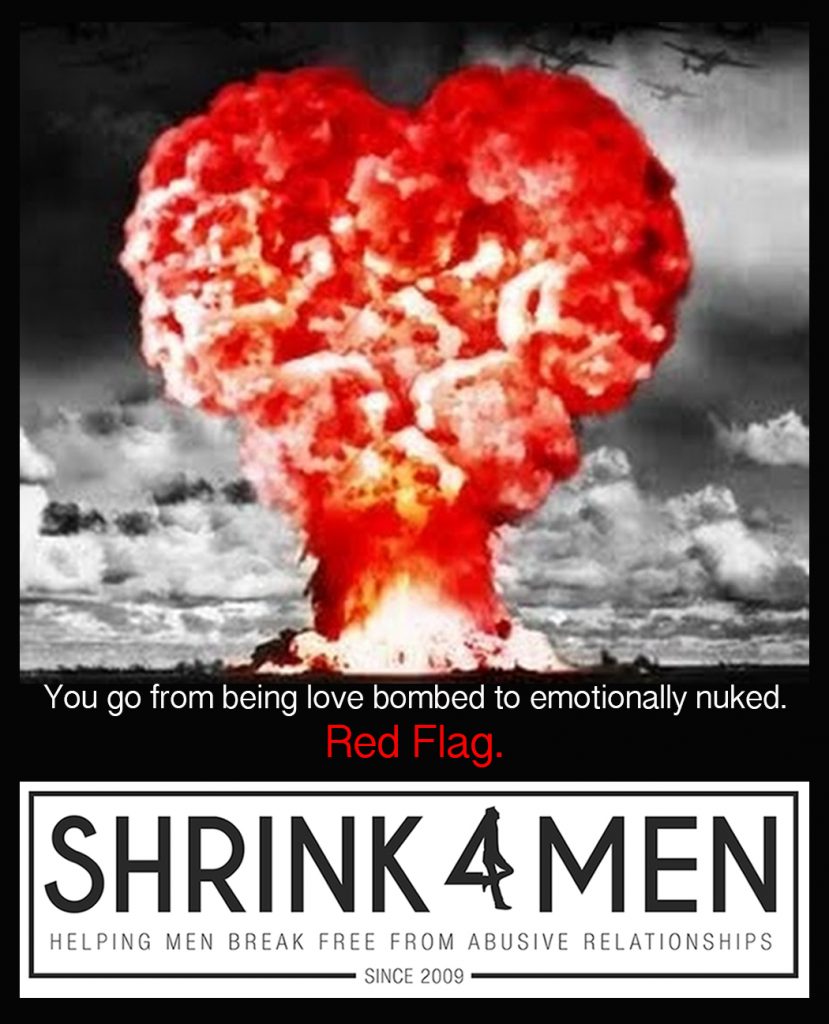 Love bombing is, in and of itself, a Red Flag. Emotionally healthy adults don’t love bomb one another at the beginning of a relationship. There may be intense attraction or infatuation, but that’s different from love bombing.

Love bombing is a term borrowed from the recruiting techniques of cults. The narcissist, borderline, histrionic or psychopath hoists you atop a pedestal and showers you with flattery, adoration, sex, affection, promises of a happily ever after (i.e., future faking) or whatever else she or he thinks you want to hear in order to create an unnaturally fast bond.

Abusive personalities are often described as Jekyll and Hyde. They go from being seemingly incredibly good (the false public persona) to someone you want to fire hose with holy water in self-defense (the monster behind the mask). I’m not saying that some of these individuals don’t have genuinely good qualities. Some of them do. However, it doesn’t make up for the abuse. A tiger might purr as you pet it, but sooner or later it’s going to rip your arm off and feast upon you.

A client once asked, “Well come on, what guy wouldn’t fall for a beautiful woman who says you’re the most amazing man she’s ever known and best sex she’s ever had?” Actually, quite a lot of men and women don’t fall for it. In fact, they become skeptical and concerned especially if the compliments are way over the top and they’re being pressured to make a fast commitment (e.g., going engagement ring shopping after only a week or wanting to move in together right away).

If you’re codependent, you’re most likely attracted to narcissistic, borderline and sociopathic adult partners because of their similarities to your parent(s). This is also what makes you vulnerable to love bombing.

Love bombing (i.e., the idealization stage) seems like the unconditional love, adoration and acceptance you didn’t get as a child or only under certain conditions. At long last you feel valued, cherished, appreciated and understood. This can be very intoxicating indeed.

That’s the problem. You’re intoxicated. Drugged with adoration into a euphoric state. There’s no way that can last. And the high from love bombing packs one hell of a hangover that no Tylenol and greasy fried breakfast can cure.

This is why, after the devaluation leading up to the discard begins, you try so hard to return to the love bombing. What happened? How did you go from being up so high to a nuclear winter? The love bombing is extreme. The devaluation and discard are equally extreme, but in malevolence, treachery and cruelty. You’re left trying to figure out how you went from being love bombed to being nuked. Many of my clients state, “She or he seemed too good to be true. It felt like too much too soon.” But they wanted to believe it was possible so very badly that they ignored their gut instincts and common sense.

Being ripped from the euphoria of idealization and love bombing is confusing and jarring. For many, it dredges up old childhood wounds. In response, you double down. You can make this work. (No, you can’t). You will prove yourself worthy and good enough. (You already are — your abuser is not). All of a sudden your ideal lover is another iteration of your fucked up parent and you’re once again the wounded child just wanting to be loved.

This is also why many men and women who have a pattern of relationships with narcissists, borderlines, psychopaths, histrionics and other abusive bullies don’t feel as intense an attraction to stable, emotionally healthy potential partners. Is that really any wonder? It’s like expecting a shot of espresso to give you the same rush as a kilo of cocaine. On the other hand, a shot of espresso isn’t going to devastate your body, mind, soul, children, finances and freedom.