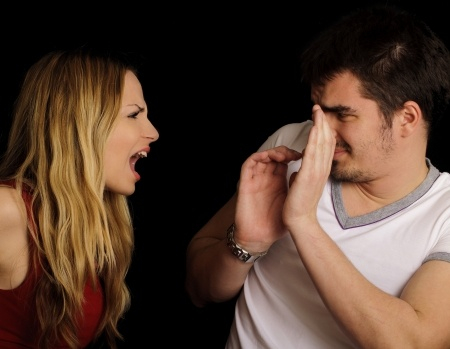 It’s day 5 of Domestic Violence Awareness Month. Verbal, a longtime member of the Shrink4MenForum, shares vignettes from his marriage to an emotionally and physically abusive monster — his wife.

I have been married to my wife, whom I shall refer to here as The Crazy Lady (TCL), since 1995. She presents many of the symptoms common to the Narcissistic Personality Disorder type. During the period roughly spanning the years 2000 to 2005, she was regularly verbally and physically abusive towards me. During that period I documented a small number of her attacks on the advice of a couple of mental health professionals. Here are a few of the more memorable attacks, excerpted for your reading pleasure.

Circa April 2001. I went grocery shopping with the kids (I would usually take them with me). TCL had given me a list and told me get those things only. At the store, I got all the stuff on the list, plus I picked up a bag of macaroni. I did this because we talked about me helping out by making dinner sometimes, such as cooking up some macaroni. Besides, it seems like a good staple to have around.

When I came home and we unpacked the groceries, she confronted me on the macaroni. I explained why I bought it, even though it wasn’t on the list. She went into a rage, smashed the bag open on the kitchen floor, and verbally abused me with a stream of profanity. She interpreted my action (buying off the list) as a direct affront to her. While I was kneeling on the floor trying to sweep up the mess, she kicked me several times. She then taunted me for being so slow to clean it up.

Circa June 2001. One evening while we were in the kitchen, there was an argument about something (I don’t remember what). She slapped/punched/kicked me several times. While I had my back to her, she picked up a kitchen knife and held the point to my back (didn’t break the skin), and said through clenched teeth that she hated me so much that she wanted to kill me.

17 Aug 2001. (Background: we still hadn’t put away all our stuff from our move the previous year. Our dining room was storage for several partially unpacked boxes.) While I was kneeling on the floor picking up the kids’ toys, TCL came in holding our daughter. We began to argue about why I haven’t contributed more to putting the house in order. She gestured to a large rolled-up strand of Christmas lights and asked me, how hard would it be to put those away? I didn’t have a good answer, except that the daily household chores take precedence.

She picked up the roll of lights and hit me about a half-dozen times across the back and neck. Throughout, TCL held our daughter in her other arm. Our daughter was bawling and saying, “Dada! Dada!” After TCL stopped, she said to me, “If I have to go to jail, when I get out, I will kill you. I will stab you in the chest until you are dead. Do you understand that?” I said yes, but why would you go to jail? She said that I had welts on my neck.

I raised my hand up to feel, and sure enough, there were several good-sized welts on my neck. I think this was the same outburst where she took some of my shirts, put them in the kitchen sink, and poured bleach over them. Later the next day, I vacuumed up tiny bits of glass that had broken off the strand of lights.

20 Aug 2001. On our drive back from a trip to the ocean, we got into an argument over how our daughter got her finger crunched by the car door (fortunately, it didn’t require medical attention) while in my care. TCL She pulled a pencil from the glove compartment and jabbed my leg. She pulled my sunglasses off my face and broke them into pieces. This all occurred as I was driving the car down the freeway at 60 miles per hour, with the kids in the back.

21 Aug 2001. I went up to the bedroom after talking to the pastor who married us on the phone. I said that I thought it would be good for us to meet with him. I repeated his statement that he felt that the real TCL wanted to make it work. Result: outrage.

She said that I am an arrogant bastard for thinking such a thing. She said, “This is the real TCL,” and then proceeded to hit me on the head and arm, saying over and over, “Did you tell him about this? Huh? Did you tell him about this?” I lied and said no, feeling there was no need to further inflame her. I went downstairs, and she followed me to the kitchen, whereupon she grabbed and squeezed my testicles.

This transpired while I was holding our daughter in one arm and pouring milk into her sippy-cup with the other, so I was unable to immediately fend off TCL. She kept bellowing at me to get out. To defuse the situation, I complied and slept in the car.

25 Aug 2001. I had taken the kids to the park, and when we returned home, our son started having a fit. He had gotten hungry while we were out and needed to eat. While I was making a sandwich for him, he had a meltdown. TCL came in to help calm him down. She then accused me of poor parenting. She escalated. She punched me several times, and told me to get out.

I went upstairs to the bathroom. She came in and punched/slapped me several times more. She hit me with her hairbrush until it broke into two pieces. A few minutes later, I lay down in the den for a quiet moment. TCL came in and took up the argument again. She threw a box at me, and smacked me with a small plastic tray.

As I was lying down, she climbed on my chest and slapped/punched me several times more. I told her she had to stop hitting. She said, “I don’t have to take orders from you. I can do whatever I want.” She then said, “If you tell anyone that I hit you, I will lie and say it never happened.”

2 Sep 2001. That night, she went at me verbally. Let me paraphrase the most disturbing part: “If we split and you get custody of the kids, I will find you and kill you. No — better yet, I will kill your mother. Even if I am in jail, I will arrange it from the inside. It is not that hard to arrange a hit. What do you think of that? Huh? Huh? Why don’t you go tell the pastor who married us that?”

She is saying all this with her face a few inches from mine, like a scene from a bad Hollywood script. I told her I thought she needed help, seeing as she is threatening to kill people.

2 Nov 2001. I spent the morning on a field trip with our son’s pre-school class to visit an aviation museum. I took him to the church, where we got into the bus with the rest of his class, his teacher, and other parents, for the trip to the museum. Upon returning home from the trip, I took our son upstairs where TCL was, and asked him to tell mama about his trip to the museum.

A 30-40 minute diatribe followed. Finally, I left the room to read books to our daughter in her bedroom. As I was sitting on the floor, TCL came into the room and, without warning, kicked me in my lower back, either with her knee or heel (I couldn’t see). My lower back was sore for several days. Special note: TCL has maintained that she did not kick me during this incident. She opined that I might have injured my back at work. I don’t think she is trying to lie. Rather, I truly believe that she has no recollection of having kicked me. She was so escalated that one can theorize she experienced some sort of memory blackout.

Christmas Holiday 2001. Over the course of a few days during the holidays, TCL hit me with a total of two to three dozen open handed slaps to the left side of my face. A mild bruise, purplish at first, then yellow, was visible around my left eye.

28 Dec 2002. We were driving to IKEA with the kids in the back of the car. TCL began asking me why, six months earlier, I had let our son play on a lakeside beach while I tended to our daughter on a swing 50 yards away. On many occasions, I have maintained that I instructed our son to not go near the water while I was with our daughter, and he complied. Since I am a non-swimmer, but our son cooperates with my instructions, I felt it was a safe choice. TCL has disagreed vociferously. She believes that I think that I am a strong swimmer, when in fact I know that I am nothing of the sort (I only swim with fins and snorkel).

During the drive on the freeway, she went into a rage. She told me to pull off onto the median and get out of the car. I refused to do so, and she threatened to grab the wheel and cause us to crash. I replied that I thought that was a really bad idea. She then jerked the wheel and let go, causing the car to nearly lurch out of its lane. She then did this a second time.

Moments later, as we were driving on surface streets, I again refused to stop in the middle of traffic and get out. She then pounded a metal-cased tape measure on my right hand (which was on the shifter) and forearm. She hit me there again with the hard heel of her shoe. The blows left visible swelling and bruising on my arm. To reiterate, this all occurred as the car was in motion, with our two children in the back seat.

Her physical and verbal attacks gradually subsided to the point where they are rare. Yes, I am still married to her. I have stayed to keep our children under one roof, and they are now in high school. The marriage exists as a social, economic and logistical unit. It is in no way a marriage based on love and mutual respect. There is no sex or any kind of affection. The writing is on the wall.