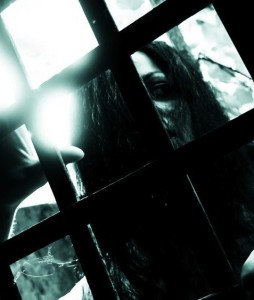 Welcome to Domestic Violence Awareness Month on Shrink4Men. Men comprise approximately 50% of domestic violence victims, but we rarely read or hear about this. In this respect, men are invisible victims.

In an effort to raise public awareness about male victims of domestic violence, we will publish an In His Own Words account everyday in October. If you would like to share your story, please review the submission guidelines at the end of this article.

Today’s In His Own Words is written by “Gerald Kensington” (not his real name). Thank you, Gerald, and much strength to you and your children.

Even as I start typing I am fearful that she will somehow figure out I wrote this and I will, again, be subjected to her spite and vindictive behavior, which knows no bounds. But I also believe writing this will be somewhat therapeutic for me. I am living a nightmare and she has, and likely will continue to, successfully manipulate those who can validate her role as “victim”, as well as those who can influence such important things as child custody (e.g., evaluators), leaving me as the “villain.”

I am beyond frustrated at the complete lack of resources available to abused men. I’ve been looking for self-help books online and find nothing geared specifically towards men. I have considered getting one of the hundreds available to women as the abused and just switch gender roles, but it’s hard to believe there are no books and other resources for men.

I have been with her for over 13 years. I ignored all of the red flags, of which there were many. She would fly into fits of rage over seemingly simple and/or minor things. For example, she berated me for over an hour once because I went to the bathroom and did not open the window in anticipation of her coming in later. From the moment we met I felt she was “the one.” She liked everything I liked, said everything right, and seemed to be exactly who I was looking for in a spouse.

I made the mistake of telling her this. Once I voiced my beliefs of her being “it,” I was constantly asked “When are you going to propose?!” I ended up proposing before I was ready, but I knew it would get her off my back. Little did I know it would be replaced with “When are we going to have babies?!”

She grew up in a broken home – her dad has been divorced three times. I’ve never seen it, but she often spoke of his uncontrollable temper and throwing plates (and their cat) against the walls, over something as small as the phone ringing during dinner. He cheated on her mom. She “thinks” she was raped in high school. She has had two abortions from two different guys, one in high school and one in college. She had bulimia. She, admittedly, has been through a lot. Apparently, she thought it only fair I be as unhappy as her.

We “unexpectedly” got pregnant just two months after our wedding. She tells people she told me she was going off birth control and that I was “fine with it,” but that is not the case.

We had two more babies, also unplanned (by me). During our first pregnancy she developed severe OCD, all revolving around “something bad happening” to the pregnancy. When nothing “bad” happened, it then turned it to obsessing over our baby daughter.

Our lives became a living hell. I read as much as I could about OCD, trying to learn how it was affecting her and how I could better relate to her. Nothing helped. We were both miserable, but we both loved our kids beyond comprehension.

She began telling me that I was “100% responsible” for our marital problems. I believed her. There was such unbelievable anger and resentment. How could I continue upsetting her so much? I was a bad person. She began calling me names, and the yelling/swearing worsened, though now it was happening in front of the kids.

Doors were being slammed and objects thrown at me. She came after me once, fists flying, and I had to grab her arms to hold her back, leaving a mark on her forearm.  “Look what you’ve done to me!!!” she yelled.

For a period of almost four years she spent nearly $8,000/mo on her credit card (despite me not making that much). Once I pled with her to stop the spending and she yelled at me for being “controlling.” We were in massive debt.

She kicked me out of the house all the time for upsetting her; sleeping on a couch or at my parents’ house was commonplace. She threatened divorce probably 38 times if she didn’t get what she wanted from me.

I told her I didn’t feel comfortable having a fourth baby, and she started calling me “Dream Crusher.” She bribed me with sex to get what she wanted, and would withhold it if she didn’t.

Her erratic behavior only got worse when she was drunk. One night she was so uncontrollable I actually considered calling the police, but I couldn’t make myself do it. I always felt (and still do, somehow!) this need to protect her. I “escaped” her by going into the room where the kids were all sleeping, hoping she would leave me alone.  She did not.

As I was lying down I had a pitcher of water dumped on me. I later heard her describe to her mom how she “had to dump water” on me because I was “acting so crazy.” I was losing my mind, and she validated it by saying things like, “You have absolutely no concept of reality.” I doubted my own thoughts, feelings, intentions, beliefs – everything. I doubted myself to my core. My three beautiful kids were the only reason I stayed as long as I did.

After four years of her abuse, I finally told my parents, fearful that no one else would believe me. After all, she is “so sweet” and very intelligent. Everyone likes her! My parents, being religious, are against divorce; though, over a period of years, they would consistently urge for me to “get out” of the marriage.

One day, after being yelled at, I finally broke down. I told her I couldn’t take it anymore. I told her I didn’t know what was going on, but something was very wrong. I was losing my mind. That afternoon, in my home office, she shared with me something I’ll never forget that she later conveniently “forgot.”

She admitted to setting me up to fail, putting me in “no win” situations, and something she called “checks and balances.” When things were going “well” she would intentionally make them “bad” in an effort to control when the bad would happen. It was crazy talk, but it explained so much. I recently brought this monumental (to me) conversation up to her, and she completely denied it ever happening.

She filed for divorce in April 2013. She has falsely accused me of molesting our daughter. She originally got this idea by, when snooping through my phone, seeing texts between a friend and I wherein my friend referred to attractive adult women as “baby girls.” This nightmare began in January 2013 and it has progressively gotten worse.

She has now, through lies, distortions, and half-truths, insinuated to the child custody evaluator that I must have also molested my boys. I was the primary caregiver for all three kids, while working full-time, during her four years in professional school. I now have no custody and only supervised visits.

Meanwhile she spread lies and half-truths all around town. I am losing friends. I have no life left and each day is miserable to wake up to. I used to be an incredibly happy person, despite being married to her.

Her abuse has lasted 13 years. I never realized it was abuse while we were together, and still somehow deny it. It feels like abuse. I just can’t believe I allowed myself to be treated like this. Anytime I tried to bring it up it was turned around on me.

She cheated on me with a woman. She told me it was because I had recently told her how unhappy I was. One night she got drunk and drove somewhere while I was kicked out, leaving the kids (ages 4, 3, and 1) at home alone.

The next morning she told me she drank so much because I had upset her so much. I am such an idiot. Only now, away from it all, can I see things more clearly. Yet she has taken the only things I care about – our children.  My denial and “devotion” has led to my demise. I am an empty shell of the person I once was.

By no means am I free from responsibility. Despite being told I was 100% responsible for all of our problems, deep down I knew I should accept 50%, and I do. I became so detached and disengaged from her early on that there was no hope for us; I began despising her.

Her unpredictable moods, temper, and inability to control her emotions, among many other things, were too much to handle. Her 13+ years of abuse led me to do some things towards her as a way of “getting back.” I am extremely regretful and sorry for my actions and how they may have affected her, and in no way do I attempt to justify my behavior as it relates to her. My point is I started changing as a person. I am not a bad person, but she has led me to believe over all of these years, and particularly now, that I am.

Years of pent up frustration, confusion, anger, and resentment began eating away at me. I developed gastric issues and had not one but two separate surgeries for two unrelated afflictions in my gut. I also developed an autoimmune disease, one that will plague me off and on for the rest of my life.

How I wish I had the strength and fortitude to leave her so long ago, but I stayed “for the kids.” Instead of modeling a loyal husband and father who would do anything for his family, I am afraid I taught them that it’s acceptable to be treated the way I was and that you just have to deal with it.

And now she is keeping us apart and my disdain for her grows everyday. I hate who I’ve allowed myself to become. I am not this person.

Don’t allow your life to be ruined anymore than it has been already. If you think you are being abused, it’s very likely that you are. Trust your instincts!  I shoved mine aside. Don’t lose yourself to this person. They’ll keep taking and you may never get it back.

Much gratitude to Gerald for publicly sharing these very painful experiences. I am sure I’m not alone in wishing him and his children the best in overcoming his soon to be ex-wife’s malicious lies. You’re not alone, Gerald.